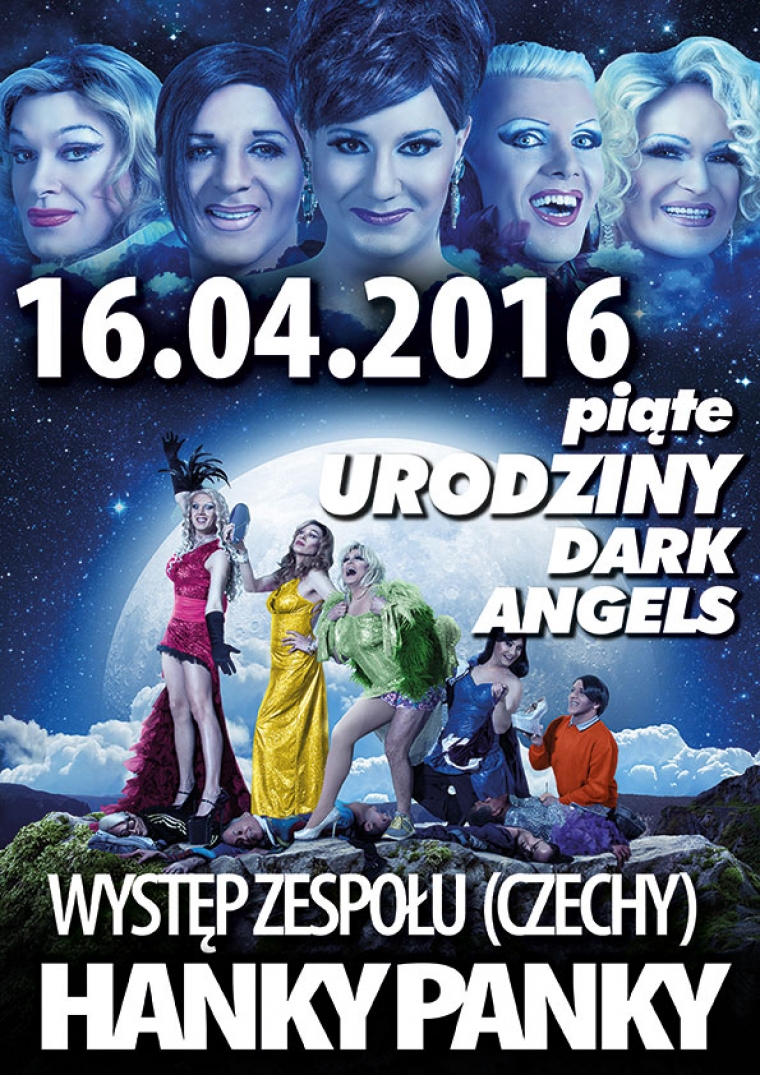 The 5th anniversary of our club is going to be solemnly celebrated on Saturday, April 16th. To this so special an evening (both for us and our dearest loyal guests) much of splendour will be added by the best known and most outstanding Czech band consisting of 4 tremendous drag queens. You are about to witness a show Poland has never ever hosted in any of its gay clubs so far!

The members of Hanky Panky serve to all sorts of events in their own country and abroad: in clubs, restaurants, community centres, concert halls (Show Iluze, Travesti Kabaret, Christmas-Vánoční Show) as well as on the open air scene (Summer-Letní Show). Except for the above mentioned standard performances (all in two parts, each 30, 45 or 60 minutes long) they also give shows composed according to a certain customer's request (Key Performance – Vystoupení na klíč) like at wedding parties. The band is best at presenting drag versions of the hottest hits of the world's music, but can also prepare a full-length concept-performance if a need be. Perfect theatrical background, wonderful and well-trained voices, thorough musical setting and overwhelming attire are for what Hanky Panky guys are really worth being seen.

The group was founded in 2002 by Stephany (Martin), who took part in the Czech-Slovak editions of the „Big Brother” and „I Have a Talent” TV shows, and for 17 years – with Nadja Mini (Vojta) and Valerie (Sergey) – had been a member of a very much alike parodical band Screamers. The three men were later supported by Jennifer Mega (Pavel), a former member of the Scandal Ladies formation.

He made his debut as a drag queen in 1997, but his exact career began in 2000 in two Prague's clubs: U Střelce i Aqua. Since 2002 he's been the manager of the Hanky Panky band with its variable team for the past 13 years.

Once upon a time he worked as a journalist (for „Hanácké Noviny” press title), and for two years as a spokesman of the Moravian Theatre in Olomouc. Publicly drag for the first time in 1998 in the Aqua club of Prague. A member of the Screamers band 2001-2015. A civil servant in his every day life.

He has spent the past 18 years on the Czech travesti scene, been a member of numerous cabarets in Prague. An unequalled version of Helena Vondráčkova, Hana Zagorova, Eva Pilarova as well as Diana Ross, Barbra Streisand, Adele and many others. He was born to the gay world in 1995 as one of the Showgirls staff. Moved to Prague in 2000 and cooperated with Aqua and Tingl Tangl clubs. He earns his everyday money as a waiter and a make-up artist. In 2015 he left the Scandal Ladies Brno group so as to join the Hanky Panky boys together with starting his hairdresser's career.

A boy from Ukraine, moved to the Czech Republic in the 90s. A professional dancer, for a time a member of the corps de ballet of the National Theatre in Prague. Could be seen as a drag queen for the first time in the Aqua club in 1996, later one of the Screamers artists from 1998 to 2015, Hanky Panky afterwards. His muse and ideal is Alla Pugacheva. He is known to perfectly perform Alla's, Ruslana's and other stars' of the Russian and Ukrainian musical scene songs. Privately he esteems solitude, silence and isolation, devotes himself to yoga and meditation.

After the show you are kindly invited to have a piece of roast pork served by the Czech artists.

We have the honour of announcing that IBB Andersia Hotel (Plac Andersa 3, Poznań) acts as the strategic partner of the event. Until further notice the hotel is offering its rooms to LGBT people at special prices.

All you need to do in order to be given a special (lower) price is to just enter: andersiahotel.pl, find the „kod promocyjny” box and insert the password „rainbow” in it: