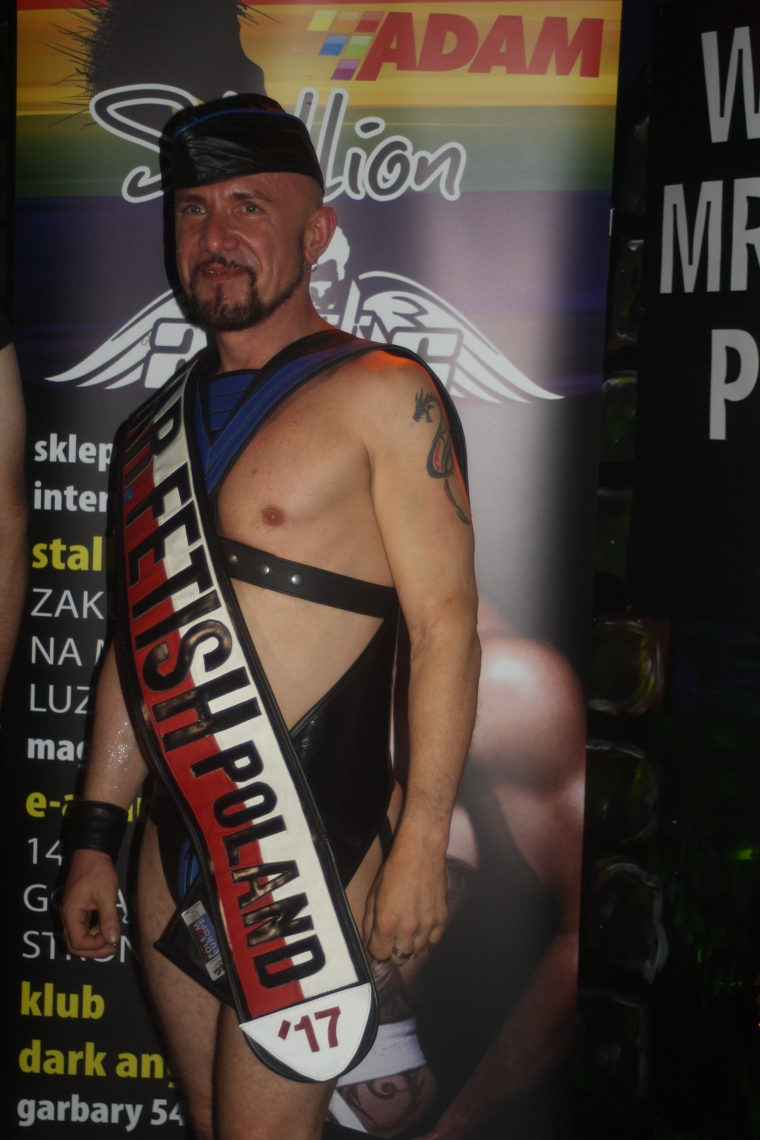 We have made it a rule that only the audience in the club is voting – those who can see (and touch) the candidates in person. In the name of honesty and objectivity we do without constituting a jury, so as without the option of online voting, unpleasantly experienced after the first edition of this contest when the allegedly bad construction of our voting site was accused of as if making it possible to vote many times from the same IP number. We now much prefer to deal with real, touchable voting cards made of paper, which are dropped by our guests to a glass ballot box placed on the bar.

The candidates officially presented themselves to the audience at midnight. At 1.00 we could see them on the stage again making their fetish self-portraits with black marker pens on white sheets of paper and telling their stories about what they were exactly wearing (each candidate changed his attire 3 times during the event). They were also asked to design an apparel for Drag Queen Migota, which she might agree to wear on stage. Migota was the vocal star of the night, distinguished by her ability to sing using her own voice, not playback, on contrary to her many professional colleagues. She's also known for establishing perfect contact with the spectators and making them sexually aroused, however within bounds of good taste. Migota presented her six songs between the two presentations of the candidates and after the verdict had been announced, captivating our hearts by her vocal virtuosity and perfection able to bring her straight to the stage of the battles in The Voice of Poland Contest.

The rivalry between the candidates proved to be very much balanced. Przemo, the candidate no. 1, won by advantage of only two votes (35:33). Tom's second defeat was disappointing not only for him, but also for his numerous fans who arrived to the club to vote for him. Unfortunately the rules of arithmetic are implacable.

The newly elected Mister was traditionally blessed with the "holy ointment" (lubricant) – and for the very first time in this club and generally in Poland – in Polish! – by Sister Mary Read, a novice to the Order of the Sisters of Perpetual Indulgence, now the only active representative of the House of Poznań, and chronologically the fifth Polish Sister ever. She overstepped her current powers according to her mentor's – Sister Daphne's from Berlin – dispensation, but she did it!

The election night was in the same time the benefit self-performance of Łukasz – Mr Leather Poland 2017. His kindest presence and congratulations for the participants of the contest expressed by him from the stage were all part of his activity as the Mister: after showing up at the Easter Weekend in Berlin and the Equality Parade in Warsaw, and before participating in the Folsom Europe fetish feast (Berlin again) and the annual November Leather&Fetish Pride in Dark Angels.

Thanks to the candidates' personal assets, Migota's vocal mastership and Sister Mary's involvement this edition of the Mr Fetish Poland Contest enjoyed the richest framework of all three so far. We only hope next year we will have more candidates and yet more artists to add splendour to the event.

Our very deepest thanks to the Candidates, the Sponsors (Dark Angels club; the webshops: Stallion.pl, Mastercolt.pl, Frixx.pl; the Heaven sauna of Warsaw; Bruno Gmünder Verlag of Berlin), Drag Queen Migota, Sister Mary, DJ Bartek and all who were so generous as to visit us that night!